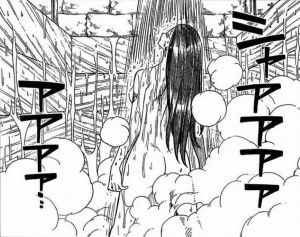 After retreating from a battle against the members of Phantom Lord, Erza Scarlet is seen having a Shower back at Fairy Tail in the guilds Shower Room. In the shower she thinks to herself of how impossible the battle they are in because of the guild masters defeat and the guilds strongest mages absences and punches the wall in anger thinking that she should have been with the master in battle. While still in the shower, she and the rest of the members of Fairy Tail feel the ground moving.

When everybody is outside seeing that Phantom Lord is going to destroy Fairy Tail with a giant laser, Erza is seen along them wearing only a White Towel where she tells everybody to get back as the chapter ends.

Continued into the next chapter titled "15 Minutes" (15分), Erza Scarlet who is still in a towel after her shower charges toward the mobile Phantom Lord and drops her towel and quickly ex-quips in armor to try and stop the laser that was being fired from hitting the Fairy Tail guild.

This chapter along with chapter 52 were first released in 2007 in Weekly Shonen Magazine. In November 16, 2007 the chapters were printed and published by Kodansha in the seventh manga volume released in Japan. The scene was officially translated and released in North America in volume 7 published by Del Rey Manga on July 28, 2009. 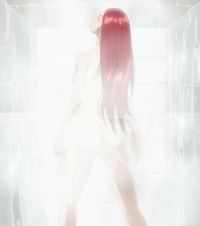 This shower scene was adapted in the 23rd episode of the anime. The changes made in the anime version was the addition of lots of steam covering Erza's body. The shower stall which was made out of wood in this scene was changed to stone. All of the post scene events were present in the same episode rather than how Erza's towel scene went into another chapter. The anime adaption also reveals that Erza's towel is pink.