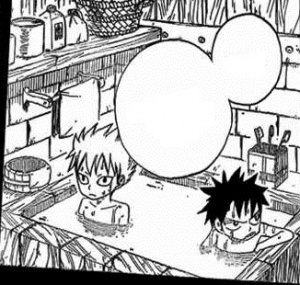 In a flashback of Gray Fullbuster and Lyon Vastia's childhood training under Ur, one of the panels during a montage of their training and home life together shows both of them sharing a Bath together in a small Hinoki Bathtub in Ur's house with Gray Arm Resting.

This bath scene was adapted into the 15th episode of the anime series. The differences between the anime and manga version was that the camera angle difference and that there was blocks of ice added to their bath indicating it to be a Cold Bath as part of their training. Lyon's positioning was changed slightly as he is more up to the back near gray and has his hands behind his head. In the manga Lyon's facial expression wasn't very happy but he was shown being happy in the anime version. The camera angle in the anime version doesn't have as many of the accessories outside of the tub visible.