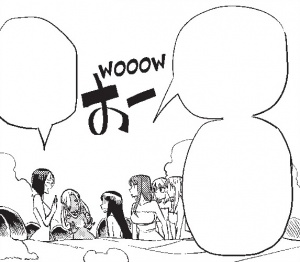 While visiting a mall in Crocus, Erza Scarlet, Lucy Heartfilia, Charle, Wendy Marvell and Juvia Lockser visit an Uchiyu are first seen getting Massages before taking a Bath in the Hot Spring. In the populated bath, Lucy recognizes the Women security guards and then meets two famous idols Prin and Lane.