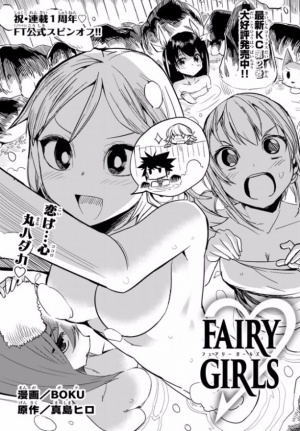 The cover page has an Onsen scene with Erza Scarlet, Juvia Lockser, Lucy Heartfilia, Wendy Marvell and Charle taking a Bath in the Hot Spring. Juvia is standing up and attempting to peek over at the males side having a dream sequence of Peeping on Gray Fullbuster.

Later on in the actual chapter, Millianna, Arana Webb and Kagura Mikazuchi are drinking milk while bathing in the Onsen with Ainelle Riverton the night that the fairy girls leave Mermaid Heel and start heading home. Right after Ainelle leaves the Bath, Millianna and Arana fall unconscious and Kagura becomes paralyzed. Ainelle comes back out clothed and reveals that she poisoned the milk and is going to capture them sell them off as slaves. The Fairy Girls end up showing up due to suspicion and manage to prevent Millianna and Arana from being captured while knocking out some of the bandits into the Hot Spring clothed but Ainelle got away with Kagura.