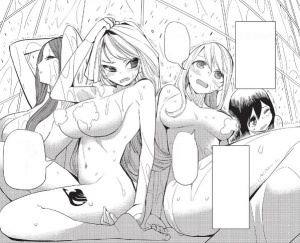 After finishing their battle against the Black Goblin guild, Erza Scarlet, Juvia Lockser, Lucy Heartfilia and Wendy Marvell all sit down together exhausted and take a Shower in the Fiore Palace's baths. Mirajane Strauss comes by wearing a Towel and talks to them.