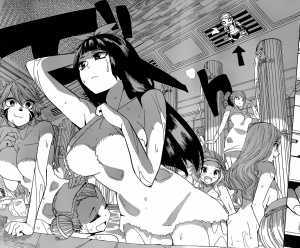 Lucy Heartfilia, Erza Scarlet, Juvia Lockser and Wendy Marvell infiltrate the Fiore palace during the end of the Grand Magic Games after party to try to secretly locate someone who is harming the guards and while going through the air ducts, they peek through and see that it is the girls side of the palaces Public Bath which was currently being occupied by Millianna, Beth Vanderwood, Kagura Mikazuchi, Levy McGarden, Mirajane Strauss along with many other unnamed females. Kagura throws something at the vent and Milliana asks whats wrong and Kagura tells her that she thought someone was Peeping at them. Juvia then looks through the other side of the vents to see Gray Fullbuster in the mens side of the bath who is bathing with Freed Justine, Jura Neekis, Lyon Vastia, Gajeel Redfox and other unnamed males. Gray uses his ice magic and throws a huge shard at the vent saying that he thought someone was peeking at them.