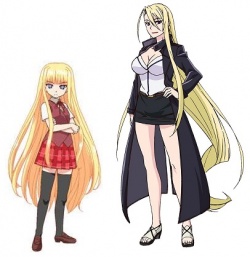 Evangeline A.K. McDowell is a character from the Mahou Sensei Negima! franchise and is known as Yukihime in it's sequel series UQ Holder!.

She bathes Off Screen and is seen in a Spa Robe.

She has an Off Screen Bathing scene where she casually leaves the bathroom completely naked in a montage of her living with the series protagonist Touta Konoe.

She bathes at a Rotenburo and is Peeped at by Touta Konoe and engages in battle with him.

The scene from last chapter continues as she loses her Towel to Touta Konoe after Kuroumaru Tokisaka joins in and helps.

There is an Onsen scene in it where she bathes with Kuroumaru Tokisaka, Karin Yuuki and Kirie Sakurame.

She wears a Towel after bathing Off Screen.

She bathes at a Rotenburo where she engages in a Bathing Fight with Touta Konoe and Kuroumaru Tokisaka later joins in.