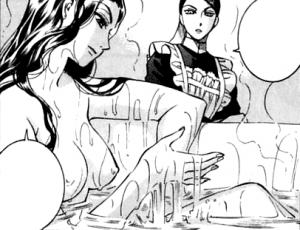 Emma chapter 39 is the first bathing scene in the Emma manga series.

The chapter begins with Dorothea Mölders taking a Bath in a Pedestal Bathtub. At the end of the chapter, Erich Mölders and Ilse Mölders are seen receiving baths in Neighboring Tin Slipper Bathtubs.

This chapter was released in Comic Beam sometime in 2005 presumably in sometime around March. It was compiled into the sixth manga volume released on August 31st, 2005.

This scene was not adapted into the anime and exclusive to the manga.

A similar bathing scene that the anime adaptation got.