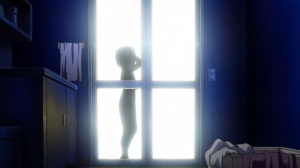 In a flashback, a young Lucy takes a Shower in the house of a family she killed.