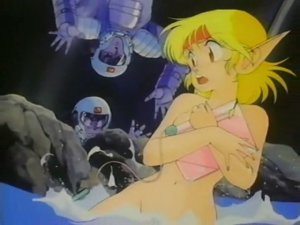 Elf 17 is an anime OVA in the Elf 17 franchise that has a bathing scene.

Ruu writes a letter to her parents on a tablet while she takes a Bath in a Hot Spring that is aboard a Spaceship. She then notices that K.K. and Muscat Tyler are out in space Peeping at her causing her to freak out and start standing up and cover her breasts. In the next scene it is revealed that they were worried and checked on her because she was in there for a long time.