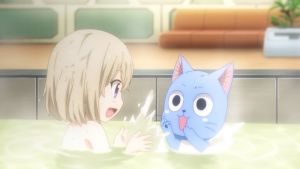 In a Flashback, Rebecca Bluegarden and Happy are seen taking a Bath together in a Bathing Pool and having a Splash Fight.

This episode along with the first one was streamed early on March 29th, 2021 before its official airdate which was April 18th, 2021. 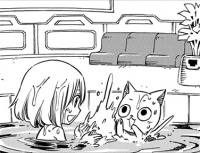 This scene is an adaptation to the 2nd chapter of the Edens Zero manga series. The manga version shows more of the background of the unspecified location this Bathing Pool was located. The anime confirmed that the bathwater was green.