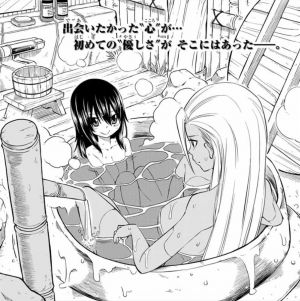 The chapter cover shows a Flashback of Homura Kougetsu and Valkyrie Yuna Bathtub Sharing in a Kamaburo.

This chapter was released in Weekly Shonen Magazine on July 31st, 2019. On November 15th, 2019 the chapter was printed and published by Kodansha in the seventh manga volume released in Japan. The scene was officially translated and released in North America in volume 7 published on April 7th, 2020.

This chapter cover was adapted into the 25th episode of the Edens Zero anime series.