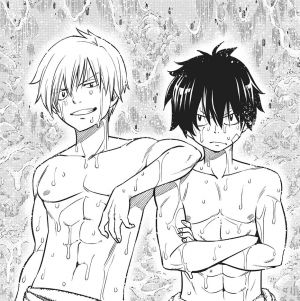 The cover has Weisz Steiner and Shiki Granbell taking a Waterfall Shower while wearing White Towels.

This chapter was released in Weekly Shonen Magazine on April 10th, 2019. On June 17th, 2019 the chapter was printed and published by Kodansha in the fifth manga volume released in Japan. The scene was officially translated and released in North America in volume 5 published on December 10, 2019.

This scene is exclusive to the manga and was not adapted into the anime series in any form.