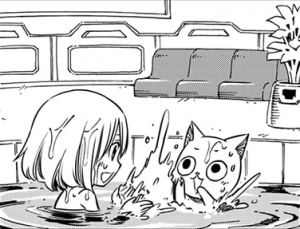 In a Flashback, she and Happy are seen taking a Bath together in a Bathing Pool and having a Splash Fight.

This chapter was released in Weekly Shonen Magazine on July 4th, 2018. In September 14th, 2018 the chapter was printed and published by Kodansha in the first manga volume released in Japan. The scene was officially translated and released in North America in volume 1 published on November 6th, 2018.

This scene was adapted into the 2nd episode of the Edens Zero anime series.