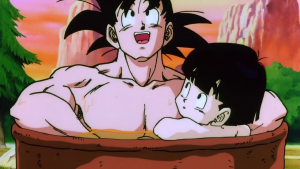 Dragon Ball Z: The Tree of Might is an anime film in the Dragon Ball franchise that has a bathing scene.

Son Goku and Son Gohan take a Bath in an Oil Drum that Chi-Chi dips her hand into when Icarus the dragon shows up.

This film is completely anime original and isn't in the manga.