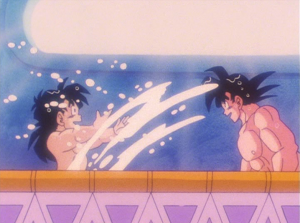 Son Goku and Son Gohan share a Bath together in a Flat Bathtub when they take a break from their accelerated training in the Hyperbolic Time Chamber. They have a Splash Fight.

This episode was first aired in Japan on September 23rd, 1992.

This scene does not happen in the manga series.