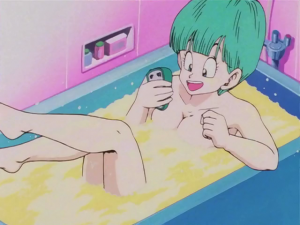 Bulma Brief takes a Bubble Bath in the Flat Bathtub in her capsule house. She is crossing her legs while talking to Dr. Brief on a radio. When Dr. Brief tells her about Goku coming on his way to rescue her and the others on Planet Namek, she gets excited and throws the radio in the air and stands up. The radio falls into the bathtub and she still talks to him while bending over naked with her explicit areas covered with Soap Suds.

The footage from this bath scene was reused in the compilation remake of Dragon Ball Z known as Dragon Ball Kai being one of the few filler scenes kept in. The beginning scene of her in the bathtub Crossing her legs being seen in the reflection of a bubble was reanimated. The rest of the scene had slightly altered colors and thicker lines. The soap suds from the Bubble Bath were more darkened and detailed and the water on Bulma's body is more visible. The last part of the original scene where she is shown bending over was removed most likely for both the reasons of its subliminal nature and for minimizing of filler.

The scene was removed from the ocean dub of Dragon Ball Z which had several episodes worth of content removed, but the scene was kept in FUNimation's dub. The Dragon Ball Kai version of the bath scene was still kept on the Nicktoons and CW4kids Toonzai broadcast of the episode but Bulma's cleavage is covered up by extra digitally animated bubbles.

This scene is completely anime original and isn't in the manga.