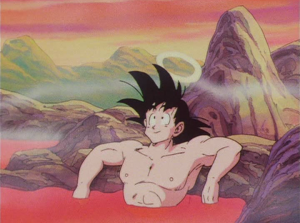 The early censored English dub run made this episode 9 where it was titled "Princess Snake's Hospitality". Goku's bath was cut shorter.

This episode was first aired in Japan on August 2nd, 1989. It was aired in English in the US on November 8th, 1996 where it was censored but still present. It's censored release was put on VHS and DVD on it's 3rd volume titled "Snake Way" which was released on October 28, 1997. The Uncut English version of it aired on July 6th, 2005. It is available in the first volume of the Funimation Remastered sets which was released on February 6th, 2007 on DVD and Bluray on December 31st, 2013 although the picture quality of those release's saturated the colors and cropped the tops and bottom of the screen in an attempt to make it wide screen. The episode was released unaltered in its correct aspect ratio to the US on November 17th, 2009 as part of the volume 1 Funimation Dragon Box.

This entire episode does not happen in the manga series. If it did it would have been in between chapter 209 and 210 (chapters 15 and 16 if going by Viz's separated Dragon Ball Z manga release). It should also be noted that this scene did not return in the remastered TV run known as Dragon Ball Kai for the obvious reason of being filler, if it did return it would have been in between episode 5 & 6.