Dragon Ball is an anime and manga franchise created by Akira Toriyama that was serialized in Weekly Shonen Jump published by Shueisha with a long running anime series Fuji TV and produced by the studio Toei Animation.

Taopaipai takes an extremely hot Bath where he boils an egg in it and eats it.

Bulma running herself a bath

In a scene taking place in a hotel room, the lower half of Lunch's body can be seen in the upper right corner of the screen in a blue Towel implying that she had an Off Screen Bath. 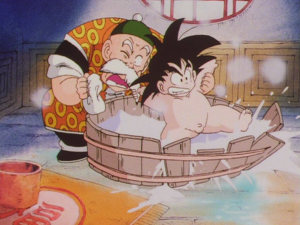 Flashback of baby Son Goku being given a bath

A Flashback Bathing Scene of Son Goku as a baby is shown as he is struggling while his adopted grandfather Son Gohan tries to bathe him in a small Washtub.

Son Gohan is seen Skinny Dipping in a messy lake during a rain storm to catch a fish to eat.

Goku bathing in a hot spring

In the Funimation Dub, Bulma Brief claims she hasn't showered in weeks and ran out of lip gloss a month ago.

In the Funimation Dub, Bulma Brief whines about not having a Shower for days.

Vegeta has a Shower scene.

A picture in one of Kame-sen'nin Roshi's magazines shows an [[Unnamed Bathers (Dragon Ball)|unnamed female taking a Shower.

Son Gohan decides to splash his father Son Goku as they take a break from their accelerated training in the Hyperbolic Time Chamber. In the english dub, Goku says "pretty toasty huh" and Gohan responds with "Ya, it feels like one of mom's baths". This phrase possibly implies that Chi-Chi likes her baths really hot or could be referring to the baths that she draws for them.

Trunks turns on the shower in the world tournament locker room to fool the announcer into thinking Mighty Mask is in the shower.

Mr. Satan takes a Shower and then drops his Towel in front of the press.

"The Evil of Men" was the first episode of the Fusion Saga, and aired 1 February 1995

After getting messy from a pancake breakfast, Buu bathes with Bee the dog, and they are joined by Mr. Satan (renamed Hercule in dub) who brings a Scrub Brush and Soap. Satan wears a blue Bathrobe afterward.

Chi-Chi and Bulma go tell Goten and Trunks they have to take a bath before having a nap. Goten is enthusiastic about taking a bath with Trunks but Trunks say no way forget it.

Yamcha has an Off Screen Shower in the otherworld. In the english dub it was a Steam Bath.

Goten and Trunks merge into Gotenks while bathing with Goku and fight him inside the Barrel Bath, but he then overpowers him/them by transforming into a Super Saiyan, joking that they should stay fused so Chi-Chi can only spank them once. This unfortunately destroys their hot tub in the process.

Bardock has a Tube Bath scene.

While staying in a hotel room on planet Imecka, Pan attempts to take a Shower but then comes out of the bathroom in a Bathrobe and a Towel on her head telling Trunks that there is a money meter on the shower charging them every second. Pan doesn't end up having the shower as Trunks grabs her and Goku and escapes the hotel since there was money meters on everything charging their hotel bill.

Dragon Ball: The Path to Power

The footage from Bulma Brief's bath scene from episode 49 of Dragon Ball Z was reused in this remake being one of the few filler scenes from Dragon Ball Z to kept in Dragon Ball Kai. The beginning scene of Bulma in the bathtub Crossing her legs being seen in the reflection of a bubble was reanimated. In the rest of the scene had slightly altered colors and thicker lines. The soap suds from the Bubble Bath were more darkened and detailed and the water on Bulma's body is more visible. The last part of the original scene where Bulma is shown bending over was removed most likely for both the reasons of its subliminal nature and for minimizing of filler.

The bath scene is still kept on the Nicktoons and CW4kids Toonzai broadcast of the episode but Bulma's cleavage is covered up by extra digitally animated bubbles.

Bardock has a Tube Bath in a Flashback.

During the movie's ending credits many pages throughout the entire manga are shown. The only bathing that appeared from the manga was Son Goku and Kuririn's Skinny Dipping scene from chapter 31.

Heles is seen after Off Screen Bathing in a Bathing Pool.

There is a reanimated Flashback of Son Goku and Kuririn's Skinny Dipping during their days training with Kame-Sen'nin Roshi.

Bulma Brief bathes Off Screen and comes out of her Ofuro into her Changing Room while wearing a Towel to find that Son Goku is standing their asking her if Whis has arrived yet angering her and punching him for the intrusion.

Bulma Brief yells at Son Goku and Vegeta for showing up Filthy and unshaven after their Hyperbolic Time Chamber training and tells them to take a Shower which they do Off Screen.

Son Goku accidentally teleports himself into the bedroom of Bulma Brief just as she finished having an Off Screen Shower and walks into the naked with a pink Towel over her her head drying her hair and thinking it is her husband Vegeta. When she turns the light on she sees Goku and screams and covers her body completely with the towel while Vegeta runs in. Goku says that it was an accident and that he had no interest in trying to look at her saggy breasts getting her angry and pushing a button to bring several lasers out to shoot him for intruding but he teleports out.

Android 18 and Marron take an Off Screen Bath together and are seen with Towels on their heads afterwards while Son Goku and Kuririn are sparring with each other.

Bulma Brief has Vegeta clean the Ofuro in Capsule Corporation and he destroys it before Bulma scolds him by saying that Kao cleaning products are how you are supposed to clean it.

The trailer released July 20th, 2018 shows that it will have a Tube Bath scene.