This is a list of non-bathing scenes in the Dragon Ball franchise such as unused bathing facilities and Off Screen Bathing implications. 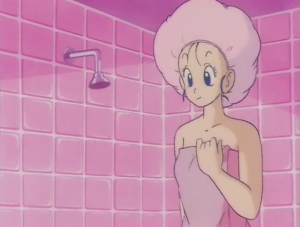 Kamesen'nin Roshi runs a Bath for Lunch in hopes that he will be able to peep on her with the new watch he got from Bulma that shrinks himself. We see a Dream Sequence of Lunch wearing a Pink Towel and Shower Cap and then dream ends right when Lunch drops her towel before getting in. When Roshi tells Lunch that he prepared a bath for her, she appreciates the offer but rejects since she is in the middle of cooking but Roshi being inpatient attempts to forcefully take over the cooking resulting in Lunch sneezing and turning into her bad form and bossing Roshi around. After Red Ribbon Army soldiers and Roshi saves Lunch, he pushes Lunch back into the house and tells her to go take a hot bath Off Screen while he finishes off the soldiers. It's unknown if the bad Lunch actually complied with Roshi's request to take a bath and if Roshi was able to get a peep at her during said bath. 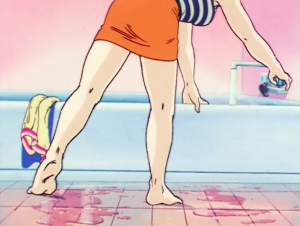