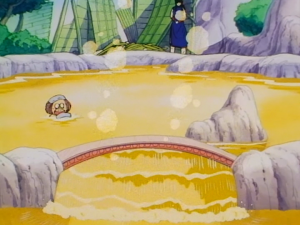 Chi-Chi attempts to bathe in a Hot Spring that Uranai Baba is already bathing in. When she starts Stripping, a crowd of pigs end up crowding around a peep hole and end up breaking the shack causing her to freak out and before she even gets her shirt off. She doesn't end up taking the bath and the Hot Spring ends up being drained.