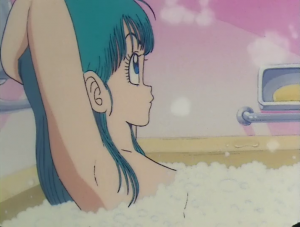 Bulma Brief gives Son Goku a Shower in her capsule house's Unit Bathtub because he stinks and doesn't know what a Bath is. Later on, Bulma lounges in a Bubble Bath crossing her legs while talking to herself. Bulma then closes her eyes and lays on her side and when she opens them back up she see's Goku standing there looking at her. Bulma screams and quickly submerges herself deeper in the water so only her head is sticking out of the bath water while Goku makes a comment about her breasts thinking that girls have an extra butt on their chest. After Bulma finds out that Goku is closer to her age when she asked how old he is, she begins to start throwing several bath accessories at him to make him leave.

When Goku is naked standing in front of Bulma in the beginning of Goku's bath scene there is a stool digitally added to cover his private in the Ocean Group Dub. Also the bathtub is made a bit taller to cover up his private when he was in it. These edits were also left in the FUNimation Dub's TV release while they released the episode unedited on DVD.

In all versions of the English dub the scene where Bulma is taking a bath and Goku is talking to her about her breasts was dubbed over by him saying that he wants to scrub her back.

A shot of Bulma taking a bath in this episode was used in a Japanese Dragon Ball trading card. A miniature figurine based off of this bath scene was released where Goku watches Bulma take a bath but the figure changed the tub into a Clawfoot Bathtub rather having it be a flat unit tub like in the canonical scene.

The manga version of this scene

This episode was adapted from the 2nd chapter of the manga. In the manga, Goku was standing up close to the bathtub Bulma was bathing in while in the anime, he was at a distance. Bulma's reaction to Goku watching her take a bath is different as well. In the manga she is surprised when she hears Goku's voice and slips deeper in the tub but in the anime she sees that Goku is watching her and she covers her breasts while dunking her head under the water. Also in the anime, after Goku ran out from Bulma throwing stuff at him, a shampoo bottle hits him in the forehead.