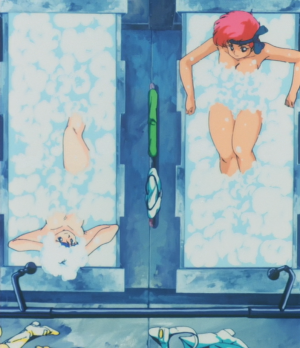 Dirty Pair: Project Eden (also known as Dirty Pair: The Movie) is an anime film in the Dirty Pair franchise with bathing scenes.

In some colorful artistic Dream Sequence like animations shown in the opening credits of the film, an unnamed naked female is seen in many situations where she is touching or inside of water.

Yuri Shampooing her hair while talking to Kei.

While the Lovely Angels, Kei and Yuri are exploring an old spaceship as part of their mission, they stumble upon the old ship's Shower Room. Being Filthy, they turn the lights on a start to Sing as they both Strip to take Bubble Baths in Neighbor Bathtubs. While Kei is laying in her bathtub Leg Stretching she has a discussion with Yuri who is Shampooing her hair over in her bathtub. As Kei is Arm Resing, she discusses that the last time she had a bath during a mission was an Off Screen Bath where to perverted old men named Jekyll and Hyde saw her.

Kei mad at Carson D. Carson for being in her bath

Meanwhile above them through the air vents, Carson D. Carson is watching them during their baths but then accidently breaks the vent startling the ladies and falling into Yuri's tub. As Carson fell clothed into Yuri's bath, the water made a big enough splash that it rinsed the shampoo out of her hair but then when she sees Carson she quickly covers her chest and screams following by a swift bath kick launching him out of the tub. As Carson flies out of Yuri's bathtub, he then falls into Kei's tub landing face first right into the area of Kei's crotch. When getting up, Kei gets angry and threatens him as he is seen grabbing her breasts. While back over in Yuri's bathtub, she is seen covering her breasts with one hand and attempting to grab the orange towel hung on the rack right outside the tub but Carson who was punched by Kei flys by quickly startling her. As Carson is knocked on the other side of the room, both of the ladies are seen out of their tubs with Yuri wearing an orange Towel and Kei wearing a green Towel Bikini.

Yuri after falling back into the bath during a fight

After they have a discussion, alien creatures come and put them into a Bathing Fight. During the commotion, Yuri who is still wearing a towel hangs onto a pipe above the tubs but its gets broken causing her to fall back into one of the bathtubs where she ends up Towel Bathing. She quickly backs out while panicking as the alien thats after her puches the bathtub over. For the majority of the film, Yuri remains in the orange towel after turning it into a Towel Bikini.

Ending Credits of Kei and Yuri bathing in wine glasses

Later on, Professor Wattsman is seen having a strange Bath in a tub full of pink balls. After the film ends, both of the Lovely Angels are seen Neighbor Bathing once again but in Wine Glasses for the entirety of the ending credits.

The bubble bath scene between Kei and Yuri was in the original Japanese trailer for the movie. The Dirty Pair Cinema Book shows images from this scene as well as a shot that wasn't put in the movie showing both of the girls tubs from the side and Yuri not having shampoo in her hair before Carson shows up. The book also contains some early sketches of the scene where Yuri has less shampoo in her hair, the tubs are slightly rounded on the edges and the bathtub's faucets are visible.

Rebecca Silverman of Anime News Network mentions on her review of the Dirty Pair Features Collection that "Yuri flopping in a tub of water" is one of the movies moments where the animation has "beautiful fluidity".

The film hit theaters on November 28th, 1986. In 1994 it was released in North America on VHS by Streamline Pictures. The film was re-dubbed and released on November 9th, 2003 in North America by ADV Films. It was re released on May 8th, 2012 as part of the Dirty Pair Features collection which included all three Dirty Pair films along with three audio tracks which were the Japanese, Steamline and ADV dubs.