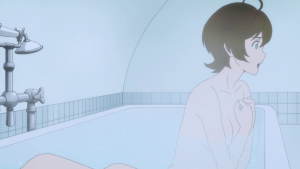 Miki Makimura takes a Shower Off Screen and then takes Bath in a Clawfoot Bathtub before being knocked Unconscious and getting possessed.

This episode first released along with the rest of the series on Netflix on January 5th, 2018.

This was adapted from the manga but was heavily deviated from most notably the tub wasn't a clawfoot in the manga. The scene was also adapted previously in Devilman/OVA 2.