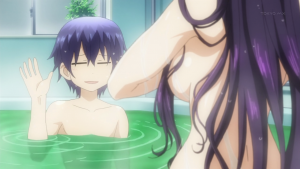 Date A Live episode 4 is the first bathing scene in the Date A Live anime series.

While coming home in the rain, Shidou Itsuka attempts to take a Shower but as he enters the bathroom, he accidentally walks in on Tohka Yatogami while she was using the shower. As a result, she slaps Shidou out of the bathroom which Shidou then learns from Kotori that Tohka will be living with them now. Later on, Shidou takes a Bath using a bath bomb (which creates Green Bathwater) and then suddenly sees the silhouette of Tohka Stripping through the door. As Shidou is freaked out, he hids in under the water as Tohka bursts in and jumps into the bathtub but then Shidou ends up rising up getting Tohka mad and tries to drown him as a result.

The original TV airing had lots of steam covering up Tohka's buttocks during the pan up of her showering and was released uncensored on the Blu-ray release.