Daisy Duck is a Disney love interest of Donald Duck. She has appeared in the Japanese video game franchise Kingdom Hearts.

Seen wearing a green Shower Hat and orange Bathrobe, Daisy calls and tells Minnie Mouse that she used up her hot water and cannot take her 'nightly-therapeutic relaxation bubble bath', and, thinking Minnie is OK with it, "invites" herself 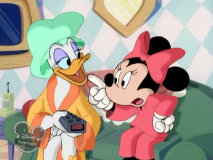 While letting the tub fill up, Daisy goes downstairs and makes Minnie even madder by switching channels on the TV and demanding soda and popcorn. While in the kitchen, Minnie fights a lion that escapes from the zoo. The water from the tub floods the house and sends the lion back to the zoo