This is a list of non-bathing scenes in the Cowboy Bebop franchise such as unused bathing facilities and Off Screen Bathing implications. 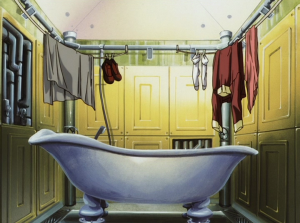 After Jet Black and Pao Meifa fall into water, Meifa bathes in the Bebop's Clawfoot Slipper Bathtub Off Screen and has her wet clothes hanging above the tub. It is unknown if Meifa chose a bath or a shower. Jet presumably bathed as well but likely bathed first since he appears to be more dry during Meifa's post bathing conversation.