Chisame Hasegawa (also known as Chiu) is a character from Mahou Sensei Negima! 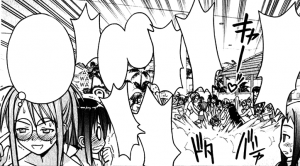 Chisame in the public bath weirded out with what's going on

Chisame is one of the girls who attended the party for Negi Springfield in the Mahora Academy Public Bath. Like everyone else she wore a Swimsuit in it but was far off from the crowd with Nodoka Miyazaki and Yue Ayase weirded out over what the other girls were doing to Negi, claiming that this is some sort of sexual harassment party. It is assumed that she was one of the girls who ran out of the baths completely when Chamo came and started removing the girls bathing suits as she wasn't present for the rest of the scene.

Chisame bathing in the Kyoto Onsen with group 3

She bathes in the Onsen at the inn during the Kyoto filed trip on the chapter cover along with the rest of group 3 Kazumi Asakura, Ayaka Yukihiro, Chizuru Naba and Natsumi Murakami along with Zazy Rainyday. Hasegawa is seen casually soaking at the end commenting to herself that the other girls (except Natsumi & Zazie) breasts are huge. 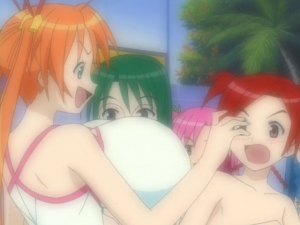 Chisame is briefly shown in the Mahora Public Bath with the rest of the girls. She is seen watching as Asuna Kagurazaka's breasts are getting huge from Negi Springfield's spell. 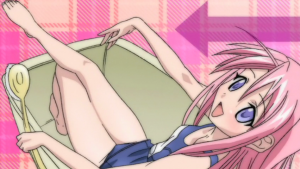 Chisame as Chiu modeling in a bathtub picture

While Chisame is pursuing her hobby of taking pictures of herself modeling under the alias Chiu for her secret website, one of the pictures is of her wearing a school Swimsuit while sitting in an empty Bathtub Bath Kicking and holding a Scrub Brush.