A Bathtub (バスタブ Basu tabu) informally referred to as a Tub for short, is a container or area that holds a body of liquid that is used to take a Bath in. Bathtubs come in many different sizes, forms and shapes depending on the resources and place of origin.

A Built-In Bathtub is a type of bathtub that is flat and attached to the ground or wall of the room. They were originally large and designed for baths that would accommodate multiple bathers. Smaller sized ones for households have been made and because they are considered easier to clean and maintain, they have started to replace many Freestanding Bathtubs in households. 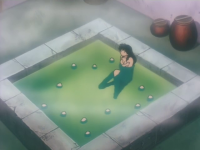 A bathing pool seen in Inuyasha.

A Bathing Pool is a Built-In Bathtub that is wide and usually designed to accommodate a large amount of bathers. It is often at ground level and is mostly seen as part of Public Baths and sometimes the private bath for rich characters.

A corner bathtub seen in Doraemon.

Corner Bathtub is a type of built in bathtub that is meant to curve around two walls and have a round corner.

A curved bathtub seen in High School of the Dead.

Curved Bathtub is a design of Unit Bathtub that's width curves out on one end. 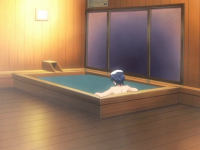 A hinoki bathtub seen in Ikkitousen.

Hinoki Bathtub is a Japanese styled Bathtub that is made out of wood. Water is usually drawn into a hinoki bathtub from a small stream that continually runs into the bathtub. It usually plays the same role as a Unit Bathtub but made out of wood and can often be even bigger than one even to the point of being the size of a Bathing Pool.

A platform bathtub seen in Un-Go.

Platform Bathtub is a bathtub that is built inside of a raised platform. 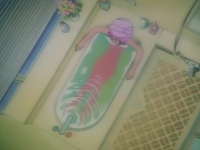 A skirted bathtub seen in Adventures of Kotetsu.

Skirted Bathtub is a built-in bathtub similar to a Unit Bathtub but the inside is oval shaped similar to a Freestanding Bathtub. These are the most common bathtubs average modern day households have in the west. 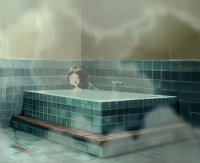 Undermount Bathtub is a type of Built-In Bathtub that is rectangular and made of some form of masonry usually being the same material as the floor such as stone or tile. They are mostly in Japanese Ofuros but are also in Public Baths but bigger. 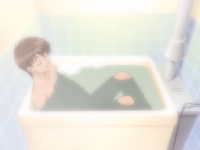 A Unit Bathtub is the most common bathtub found in Japanese Ofuros in modern households. Though unit bathtubs aren't wide and have a square shape, they are deep and can comfortably fit one person at a time. They are used for the sole purpose of soaking as they are designed to be used for Furos. Unit bathtubs have a lid that slide onto the bathtub that keeps the heat of the bathwater in so it can be reused again for a later bath.

A Freestanding Bathtub is a type of Bathtub that is a stand alone object rather than being attached to the ground like a Built-In Bathtub.

A Barrel Bathtub is a large circular bathtub that is made out of wood and designed to look like half of a barrel.

A goemonburo seen in Samurai Champloo.

A Goemonburo is a type of Japanese bathtub that has a design similar to an iron kettle with edges to the sides. It is heated from a small furnace at the bottom. A Barrel bath is an informal improvisation of this type of bathtub. It is named after the famous thief Ishikawa Goemon who was killed by being boiled alive in a cauldron.

A Clawfoot Bathtub is a classic style bathtub which originated in the late 1800s. It commonly has four legs on the bottom keeping it up and is usually deeper than most bathtubs. They are commonly seen in more rich and wealthy environments or in Western European influenced settings. The most basic design is with one flat end and one rounded end but has another one known as the double sided which has two rounded ends. Clawfoot Bathtubs have other altered designs such as the Slipper Bathtub and the Freestanding Bathtub.

A slipper bathtub seen in Nisemonogatari.

Teppouburo is a type of Wooden Japanese Bathtub that is long and oval shaped and has a lid for when its not used.

A cup seen in Chobit.

A Cup is a device that is intended to be used for drinking liquids out of but may end up being used as an improvised Bathtub for characters who are very small or have ended up in a scenario where they have been shrunken down. In rare situations, a giant cup can be seen used as a bathtub. 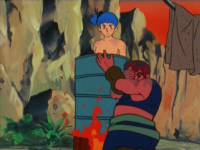 An Oil Drum is a type of liquid storage container similar to a Barrel. It is often used at times as an improvised Bathtub in poor country side environments. This is a very informal version of the Goemonburo. Usually water is poured into it and the drum is held up over a fire where the water can be heated. 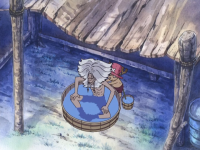 A washtub seen in One Piece.

Washtub is a short rounded Bathtub usually not meant for bathing but may end up being so on occasions where a normal bathtub isn't available. In many historical settings characters will tend to have Baths in these since most average people who did bathe ended up only bathing in one of these. Washtubs may seems like suitable bathtubs for smaller or younger characters but for more grown-up characters they seem a bit small usually not having enough space for their entire body to be submerged and sometimes have to have legs sticking out. These tubs are typically made of wood but can also be tin. 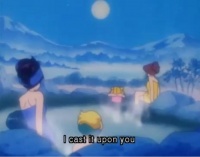 Hot Spring is a small natural lake filled with geothermally heated groundwater from the Earth's crust. In Japan, they have built hotels around them known as Onsens where the guests can bathe in them.