Blair is a character from Soul Eater.

Blair likes to take baths which is ironic since she is actually a cat and it is a common stereotype for cats to dislike baths, although she is always in her human transformation when she bathes. While bathing, she seems to always use Bubble Bath, a Rubber Duck and her magic Scrub Brush named Brush-san. She usually is seen Singing while enjoying her baths. Sometimes she wears her witch hat while she is in the bath. Blair has no shame in showing her naked body and doesn't mind if any men see her bathing and even encourages other people to bathe with her, regardless of gender. Before the time of the beginning of the series she had her baths in the tan Clawfoot Bathtub in her pumpkin house but shortly after the beginning bathes in the clawfoot bathtub in Maka Albarn and Soul Eater Evans apartment since she moved in with them. Blair has been seen to have her baths at night time and in the middle of the afternoon.

Blair is first introduced Singing while having a Bubble Bath in her house. The first shot shows her doing a Bath Kick and having a Scrub Brush scrub her leg using her magic. Next Blair is shown sitting up and asking the Scrub Brush to scrub her back next. While she is sitting up the reader gets a big view of her breasts but they are Conveniently Censored by soap suds. She is shown leaning against the edge of the bathtub having her back scrubbed by the scrub brush while continuing to sing. Outside Soul jumps through the window intending to take Blair head on, She see's him going through the window. When Soul see's that Blair is naked in the bathtub he looses focus and falls into the tub with her. When Soul gets his head out of the water, he see's Blair bent over in his face telling him he's cute. While Soul has a nose bleed, he tells Blair that he's a cool guy and is used to seeing naked woman all the time, but Blair seems to doubt it by telling him he has a nose bleed. Blair remains in the tub as she witnesses Maka get angry at Soul and kick him out of the tub. Blair is then seen naked outside of the tub seeing if Soul is alright by holding him right under her breasts. After Maka tells Blair she is after her Soul, Blair is then seen clothed ready to fight.

Blair is shown having a Bubble Bath at Maka & Soul's apartment in a brief cutaway gag right after a moment where Maka who is getting ready for a fight says that she wants to finish this up and go take a bath. During the Cutaway Blair is shown sitting on the rim of Maka & Souls Bathtub Singing and requesting the magic Scrub Brush to scrub her feet. In the last panel, Blair is shown in the bathtub learning over the edge saying that she is bored and wishes she could go to school like Maka and Soul.

She takes an Off Screen Bath and offers everyone at Maka and Soul's party if they want to take a bath with her and ends up dropping her Towel making Soul Eater Evans and Death the Kid to get nosebleeds.

Blair is seen controlling a Scrub Brush with magic to scrub her self while taking a Bubble Bath in the Clawfoot Bathtub in her house. Soul then flies through the window of her bathroom and lands in her tub in between her breasts. 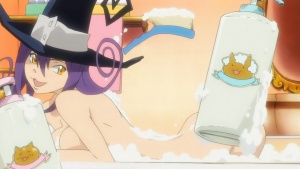 Even though the scene doesn't depict anything explicit, its initial TV running had floating bottles of shampoo and body soap placed to cover up Blair's cleavage and buttocks during the moment she was scrubbing her back while shaking her butt. The bottles were removed on the DVD releases of the episode.