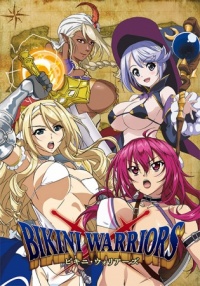 Bikini Warriors is an anime series created by Hobby Japan by studio Feel.

The series began as a series of figures by Hobby Japan and Megahouse. A 12-episode anime television series based on the setting aired between July 7th and September 22nd, 2015. A manga series and a video game followed. The series received more OVA episodes afterwards in 2016 and more in 2018.

The series consists of a sequence of short stories describing the misadventures of four female adventurers, Fighter, Mage, Dark Elf and Paladin in a fantasy world teeming with dangerous monsters and hostile magicians. Clad in generously cut-out, yet effective bikini-type armor, the four women must learn to overcome the hazards of their world to meet their living expenses while at the same time trying to get comfortable with the idea of exposing too much of their curvaceous physiques.

Mage and Paladin bathe in a Hot Spring.