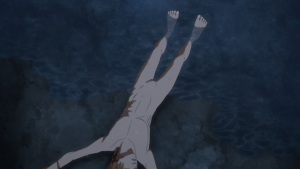 Berserk episode 6 is the fourth bathing scene in the Berserk anime series and specifically the first in the 2016 series.

Joachim ends up Skinny Dipping Unconscious after he fell off a cliff naked.