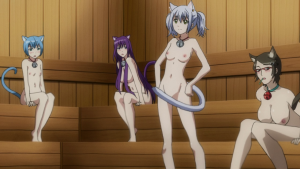 Asobi ni iku yo! episode 6 is the third bathing scene in the Asobi ni Iku yo! anime series.

Durel, Chaika, Kuune and Melwin have a Steam Bath from their virtual reality room where they have a discussion about a power suit. Afterwards they transported themselves to a cold climate where they went Skinny Dipping in its lake Off Screen.

The original TV airing of this scene had beams of light covering the girls nipples and was later released uncensored for the DVD and Blu-ray releases.