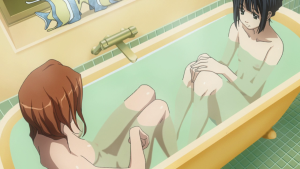 Kio Kakazu has a Bath in the Clawfoot Bathtub in his house. While bathing, an assistaroid comes to scrub his back. Kio is then out of the tub in a Furo session where he is getting his back scrubbed by the assistariod. Eris then comes in wearing a Towel to try to bathe with him. She drops her towel and hugs him from behind, pushing her breasts against his back. Manami Kinjou walks in on them and gets a misunderstanding and considers Kio a pervert for what she going on and starts attacking him with a broom. Kio runs out of the bathroom completely naked with Eris hanging onto him who is also completely naked and ends up in his living room in front of Aoi Futaba showing her his naked body embarrassing her.

Manami Kinjou and Aoi Futaba use the bathroom next and have a furo session where the two have an important discussion. At first, Manami is shown outside the bath washing her arm with a Sponge while Aoi sits in the tub crossing her legs. Once Manami finished washing her arm, she gets into the tub with Aoi and continues there discussion where she learns of Aoi's teleporting powers from using a bar of Soap as an example. Aoi gets out of the tub and starts to washing herself with a sponge but an assistariods alarm goes off causing the two to quickly leave the bath and run outside with guns to find the intruder while still naked.

On the TV airings, Steam was placed to cover up any nipples shown during the scene.