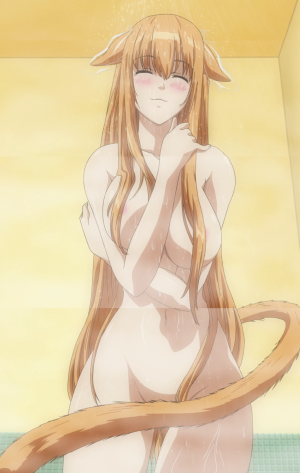 Asobi ni Iku yo! episode 2 is the first bathing scene in the Asobi ni iku yo! anime series.

Eris is seen taking a Shower in Kio Kakazu's bathroom during a montage of moments of her staying at his house while a monolouge of her explaining why her race came to Earth and why they were traveling space is heard. While showering, Eris seems to be very happy and her tail is seen conveniently covering her crotch. Outside the bathroom, Kio is seen placing a Towel in the changing room for her and ends up seeing Eris showering through the stained glass door to the bathroom giving him an embarrassed look on his face as he turns away.