From Anime Bath Scene Wiki
(Redirected from Asobi ni Iku yo!)
Jump to navigationJump to search 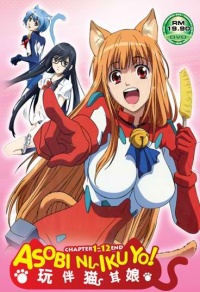 Asobi ni iku yo! (あそびにいくヨ!) (known as Cat Planet Cuties in North America) is an anime series by AIC PLUS+ that is an adaptation to a light novel and manga series by Okina Kamino.

The series was spawned by a light series written by Okina Kamino that started on October 25th, 2003 and as of now has 16 volumes. On August 26th, 2006 a manga adaptation was serialized Monthly Comic Alive and has gone on for over 8 volumes. A 12 episode anime TV adaptation was created by the studio AIC PLUS+ and directed by Youichi Ueda. Its original run was from July 10th, 2010 through September 25th, 2010 and was censored in its broadcast. After the series was released uncensored a bonus OVA was released on June 15th, 2011. In 2012, Funimation Entertainment, licensed and dubbed the series and released it under the title of Cat Planet Cuties.

The story revolves around a teenage boy named Kio Kakazu. A alien girl with cat ears named Eris part of the Catian race appears before him during a memorial service for one of his family ancestors. Before long, fanatical alien worshipers and a mysterious government agency are in hot pursuit of Eris. With the Catian race trying to make peace with the earthlings, Kio's house becomes the Catian embassy and his friends Manami Kinjou and Aoi Futaba who also work for the CIA end up taking refuge with them while all three girls have their eyes on Kio. Meanwhile the Dogian race commander Jens tries to sabotage the treaty between the Catians and Earthlings.

This category has the following 5 subcategories, out of 5 total.

The following 5 pages are in this category, out of 5 total.