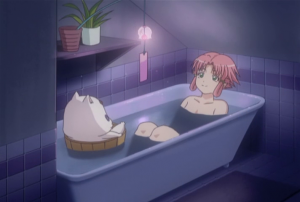 Aria the Natural episode 12 is the fifth bathing scene in the Aria anime series and specifically the third and final one in it's second season Aria the Natural.

Akari Mizunashi has a Bath in a Clawfoot Bathtub.