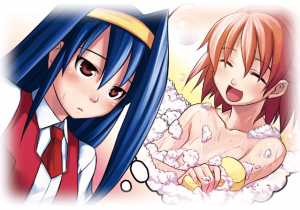 Arcana Heart is a video game developed by Examu and contains the first bathing scene in the Arcana Heart franchise.

There is unlockable bonus artwork on the Playstation 2 version where Saki Tsuzura has a Dream Sequence of Heart Aino taking a Bubble Bath and washing her arm with a Sponge. 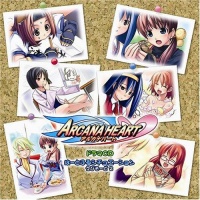 Arcana Heart CD which has this scene on the cover.

This image appears alongside some of the other bonus images on the cover for an Arcana Heart CD.

This game was released in Japan on Playstation 2 on October 12th, 2006.