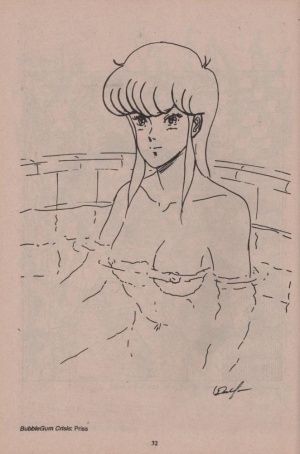 There is artwork for The Gates of Pendragon by Michel Gareau of Helene Skinny Dipping and Michael Peeping without her noticing. There is Ninja High School artwork by Ben Dunn which features a Public Bath scene with Leeanna, Mimi, Sammi, Itchy Koo and Asrial. There is also Bubblegum Crisis fanart by Don Yee which depicts Priscilla Asagiri taking a Bath in a what appears to be a rounded Undermount Bathtub. There is also Dirty Pair artwork by Adam Warren which features the american comic versions of Kei, Yuri and Mughi taking a Shower while Kei is Singing and Yuri is about to turn the shower valve.

Anime and manga scenes that are recapped in this magazine in order are:

This issue first released in North America sometime in October 1990.