Angel Beats! is a 13-episode Japanese anime television series produced by P.A Works and Aniplex. The story was originally conceived by Jun Maeda who wrote the original light novel as well as a 4-koma manga and a prequel manga series known as Angel Beats! Heaven's Door. 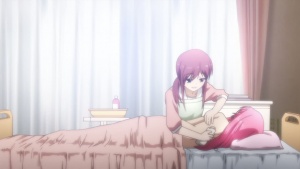 flashback of Yui getting a sponge bath from her mother

During the Flashback about Yui being paralyzed in her life, Yui is shown getting a Sponge Bath from her mom at one part.

Hisako has an Off Screen Bath.

There is a 4koma comic known as Rabbit in Dengeki G volume 6 where Yuri Nakamura suggests that the girls should have a Bath together and then has a Dream Sequence of her bathing with Shiina and Shiori Sekine in a Hot Spring and being peeped at.

There is a Public Bath scene in which you who is playing Yuzuru Otonashi talk to Hideki Hinata and Matsushita.