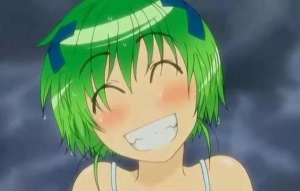 Amuro Ninagawa is the happy-go-lucky female lead character from Umisho.

Being raised at Sea, she is a naturally-gifted swimmer and known for a habit of Skinny Dipping.

Both the Manga and the OVA based on it start right off with showing Amuro taking of her (already skimpy) clothing and diving into the open sea in the nude.

In Addition to all the regular Training Sessions, she has a whole bunch of bathing, onsen & shower scenes throughout the entire series.

When she lived in Okiura's household - due to the demolition of her floating house in a typhoon - she once even went as far as using the garden hose for showering herself - stark naked, as she seems to be quite fond of moving around like that amongst other people.

Amuro Ninagawa is seen showering herself naked with a garden hose, much to the chagrin of the neighbourhood.