After waking up from a nightmare of being replaced, Isuzu Sento takes a Morning Bath in a Clawfoot Bathtub that is in her kitchen.

This chapter was first released online on ComicWalker sometime Before October 9th, 2015 which is when it was compiled into the 3rd manga volume. 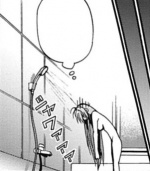 version from the original manga