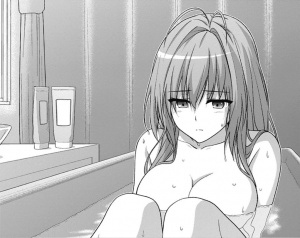 On the cover, Isuzu Sento takes a Bath in a Clawfoot Bathtub that is in her kitchen. At the end of the chapter, she takes a bath in it again at night while she is depressed.

This chapter was first released online on ComicWalker sometime Before April 9th, 2015 which is when it was compiled into the 2nd manga volume.

The chapter covers bath scene is original to this manga and wasn't in the anime but the second scene is an adaptation to the bathing scene in the 4th episode of the Amagi Brilliant Park anime.