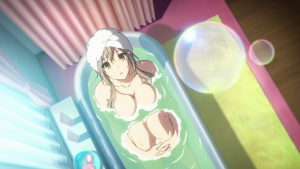 Isuzu Sento takes a Bath in a Clawfoot Bathtub that is in her kitchen.

This opening was first shown during the anime's first episode which aired in Japan on October 7th, 2014.