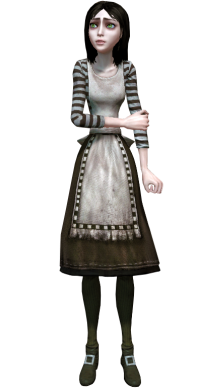 Alice Pleasance Liddell (also known as Alice Fairchild and Alice Liddle) is the main protagonist of the Alice In Wonderland franchise and is also based off of a real person from the 1800s of the same name as well as a Disney counterpart.

Alice has a Dream Sequence Bathing scene where she is picturing the mirror melting into mercury, and entwining nude with her reflection in a non-water liquid.

There is a mention of Alice being bathed in the game: July 19, 1874: In her most disturbing outburst in quite some time, Alice attacked one of the nurses while being bathed. Called her "Duchess."

She takes a Bubble Bath in an Skirted Bathtub and attempts Suicide and her daughter Calie Liddle finds her.

On one of the covers, Alice is shown Showering from a mushroom Shower Head in a flower forest.