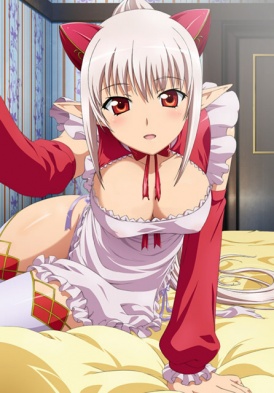 Aldra is the victor of the past two Queen's Blade tournaments and reigning Queen of the Continent. As the child of the Pope, the highest religious leader, and the daughter of the Devil King of the Netherworld, she is a cursed half-demon who, along with her sister, was persecuted everywhere they went.

One day while searching for some food, Aldra's sister disappeared. She soon made contact with the fallen angel Delmore, whom she made a contract with and gained demonic powers at the cost of her growth. She then became determined to win the Queen's Blade and use her power to search for her lost sister. Because of her current position as Queen, she would often have fits of paranoia over the fact that someone might overthrow her, which led her to establishing the Assassins of the Fang.

In Queen's Blade Rebellion, after losing the title of Queen to Leina (later Claudette), Delmore, the source of her powers, was stripped from her body, and reverted to her true adult form after her defeat. She later embarked on a journey to find her lost sister, but suffered from amnesia along the way. During her journey, she fell in love with a man and was later married.

Her happy life was short-lived when the war between the Queen's Army and the Rebel Army spread throughout the whole Continent. To protect her beloved husband, she was determined to throw herself in the fight, and made a contract with the Underworld dwellers Belphe and Dogor . However, both demons are secretly plotting to eat Aldra when given the opportunity.