Akira Takano is a character from School Rumble. 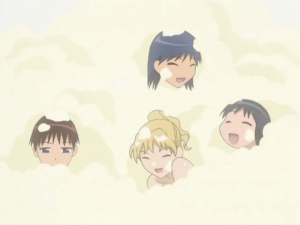 Akira in the bubble bath with Eri, Mikoto and Tenma

Akira partakes in a huge Bubble Bath with Eri Sawachika, Mikoto Suou and Tenma Tsukamoto during their slumber party at Tenma's house. While the other girls are playfully splashing around, Akira tells them that they are over doing it in a calm and serious tone.

While bathing with the girls at the local Bath House, Akira is seen sitting in the bathwater Blowing Bubbles from underwater and then she spectates the conversation of Megumi Sagano and Tsumugi Yuuki hassling Eri Sawachika.