This article is for the one-shot manga, for the character see Eliza (Akazukin Eliza) 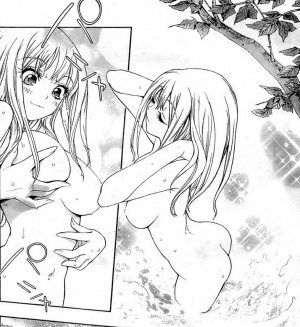 Akazukin Eliza is a one-shot manga that has a bathing scene.

Sometime at the beginning of the one-shot Eliza's Grandmother has a Slime Bath Off Screen since she was eaten by Wolf's pet worm Mizu. When Eliza meets Wolf and Mizu, she ends up getting Filth on her and decides to clean up by Skinny Dipping in a nearby lake. When Eliza finishes her Bath, she suddenly sees that Mizu ate her clothes and Wolf wakes up and accidentally sees her naked standing right in front of him. She covers her breasts and hides behind a bush and rock and Wolf apologizes and says he is going after Mizu. Eliza who is still naked and waiting finds that her bandana was the only thing Mizu didn't eat and decides to wear that to cover her crotch while she uses leafs to wear over her breasts. As Eliza makes it over to where Wolf and Mizu are, she ends up tackling Mizu to save her grandmother but Mizu ends up in a slime bath and eaten as well. While being bathed in slime inside of Mizu, Eliza then bursts Mizu open from the inside with a Bath Kick which then Eliza is coughed out butt naked and covered in slime. As Eliza covers up with a big cloth, she sees her grandmother was freed as well in covered in a cloth but also in a smaller and weakened state. Her grandmother then reveals that Mizu ate her because there was a lot of poison in her body which made her muscular but Mizu eating her took all the poison out of her body making her to the true state as an old lady like she should be. Afterwards Eliza realizes that Mizu isn't bad after all as she happily rides on top of it while she is still wearing a towel.