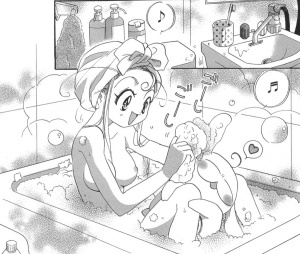 Akaten Hero! chapter 2 (or Imperfect Hero chapter 2) is the only bathing scene in the Akaten Hero! manga series.

Mayura takes a Bubble Bath in a Unit Bathtub with Poyo-chan. She stands up in the bath and starts screaming when Yuji Midorikawa peeps on her but after she finishes pummeling him, she reveals the real reason is because her scalp was burning after Shampoo got into her scab.

This chapter was compiled into the first manga volume which was released on July 24th, 2003. The original serialization was in Comic Birz at an earlier date.