Aika Sumeragi is the main protagonist to the Agent Aika franchise. Aika seems to typically bathe at night. She gets annoyed when grown women stand up in the bath without covering themselves. During the time after the events of Aika Zero but before the events of episode 5 of the original series, Aika's means of bathing was by taking Showers in a trailer she lived in. 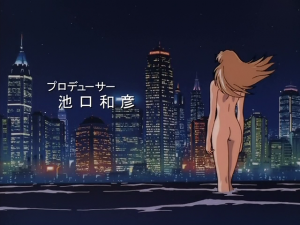 Aika skinny dipping in the ocean

In the opening credits song, Silent City by Mari Sasaki, Aika is seen naked Skinny Dipping in the ocean while Standing with the wind blowing in her direction. At first it shows a blank night sky but then a lit city appears in front of her.

At night in her trailer, she is seen taking a Shower panning from her buttocks all the way up to her head where she has her eyes closed and hands on her hair. She then opens her eyes and puts her hand out to turn the shower off. She comes out of the bathroom wearing a pink Towel and then sits on her bed with her legs crossed. She then gets up and opens her closet where she goes up to the ultranate golden bustier in there and then drops her towel just before the scene changes.

After having a physical examination, she is seen in the facilities Public Bath with Rie Petoriyacowa both sitting on the rim of the outside end of the smaller Bathing Pool possibly implying they already were in the bath. After they leave, Aika is seen getting dressed while Rie who wearing a Towel is at a vending machine asks Aika if she wants a drink.

Rion barges into the locker and reveals Rie's true identity to Aika which then causes Rie to have a bunch of Black Delmos come and attack Aika. Aika manages to kick a brown haired Black Delmo in the bathroom where she falls into the Bathing Pool clothed. As she tries to get up and scared, Aika comes over and kicks her head back in and she is fighting two other Delmos.

Recycled footage from her Shower scene from the 1st episode was shown in a montage of moments from the first half of the original series.

Aika has a Furo session with Karen Minamino and Eri Shinkai in the bathroom at Karen's house. In the bath, Aika is outside of the bathtub getting her back scrubbed by Karen with a green Sponge while Eri is sitting in the bathtub briefing Aika on the details for their mission. After telling Aika, Eri stands up in excitement exposing her naked body and points up in the air saying that their mission is the most mysterious mystery. Aika who is still having her back scrubbed calmly asks Eri how old she is since she seems to think Eri is acting childish which Eri answers 19 and then Aika tells Eri to atleast cover herself up as she is standing with bare crotch in front of Aika's face.

Aika is seen in another furo session with Karen Minamino and Eri Shinkai when they have a meeting at Karen's house. She was first in the bathtub with Karen curling her legs. As Aika tells them that they're prepared this time as she had a machine gun installed in her plane, Eri's reaction to the machine gun causes her to get excited and bend over where both her and Aika get a devious look on their faces and laugh because they want it to be fired once while the camera zooms and a Rubber Duck that was in the bathtub floats over by Aika. At some point off screen, Aika gets out of the tub and switches places with Eri. When we see Aika again, she is outside of the bathtub and washing her arm with a green Sponge tells Eri who is in the bathtub that its ok if she feels like quitting since its dangerous work which angers Eri as she starts yelling at Aika frightening her. Eri then stands up in the bath in front of Aika which she then says that she gets it and just wants her to cover up her front.